Recently, cutting bevel gears on universal 5-axis milling machines has been widely accepted as a promising solution to replace the conventional cutting process. The process is highly flexible and does not require special tools. Thus, it is particularly suitable for small batches, prototypes, and repairs in use having unacceptably high lead times. In order to apply the milling process for bevel gear cutting, we should provide feasible solid models. However, the kinematic geometry of bevel gears is relatively complicated in accordance with the variety of the cutting method, such as Gleason (fixed settings, Duplex and Zerol), Klingelnberg (Cyclo-Palloid and Palloid) and Oerlikon, and it’s not easy to generate the 3-D geometry model proper for milling.

In the calculation software KISSsoft (Ref. 1), the geometry calculation of straight and skew bevel gears for standard cone types has been available for many years, in accordance with ISO 23509 (Ref. 2). Then, the expansion to 3-D models of spiral bevel gears was made covering all cone types four years ago. Since the 3-D models of the spiral bevel gears have been available, there has been much interest from many companies worldwide. The first prototype based on the 3-D model was machined by Breton (Ref. 7), one of the major 5-axis milling machine manufacturers, and enjoyed very satisfactory results. Then one of their customers, who is using a 5-axis milling machine, wanted to produce a very large bevel gear pair to replace an existing pair. However, they had a special, hard to resolve problem in that the pinion shaft having a 1,500 mm length was too long to be cut on the Breton machine. So the pinion was produced on a conventional Gleason machine, but the customer wanted to produce the gear (de2 = 500 mm) on the Breton machine. We always recommend to our users that the model for the pinion and gear must be generated by the same software and thus the combination of a pinion, manufactured on a Gleason machine, should not be combined with a gear based on the model. But the customer insisted, so we had to invent something!

We got the basic gear data and the measurement grid points of the flank form of the gear produced by their Gleason software from the customer. However, the design data didn’t include the formal definition of the flank modifications. Thus, the comparison of these measurement points with the 3-D model naturally showed small deviations. The deviation could not be eliminated easily by varying the geometric parameters and applying typical modifications such as barreling (profile crowning) and lead crowning. Thus, we developed a creative solution to generate a 3-D model of the gear and to adapt it to the given grid point from Gleason. In the following chapters we will show the procedure of the method and the application results.

Topological Modification of the Bevel Gear

The basic cone geometry of the bevel gear can be defined in accordance with ISO 23509, and the flank form is defined from the transverse tooth forms calculated along the face width. The trace form will be the extended epicycloid form by face hobbing process or circular form by face milling (Fig. 1). In KISSsoft, the tooth form is supposed to the planar involutes of the virtual spur gear in transverse section. Then, the tooth flank surface is generated by splining the tooth forms of each section.

Bevel gear machine tool manufacturers (such as Klingelnberg and Gleason) have their own methods to generate the tooth form based on the generating motion of the cutter. The tooth form is known as an octoid and is slightly different from spherical or planar involute tooth form. However, the difference of the tooth forms is normally less than the tolerance range and will pose no problem in practical use. This can be verified from the fact that the bevel gears are always produced in pairs by the same process in order to achieve a good contact pattern in practice. In order to validate the practical usage of the 3-D model we compared our model with reference models of manufacturer programs and also carried out the contact pattern check with the actual model. The results showed the tooth flanks along the face width of the two models are very well matched with only slight differences (Ref.3). 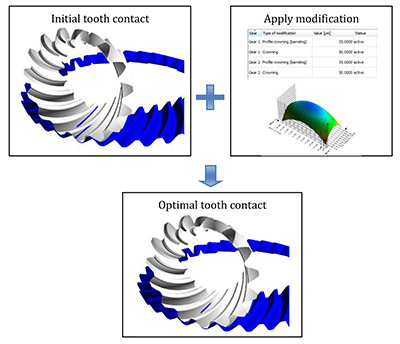 Figure 4 shows an example of the file structure of the modification used in KISSsoft. 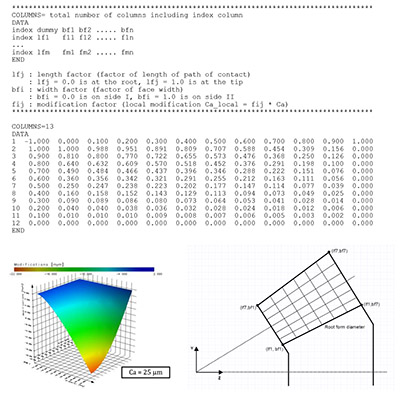 The example data map defines the progressive tip relief on Side I and no modification on Side II. Note that the modification values in the data map are normalized and the actual local modifications are calculated with Ca_ local = fij * Ca, where fij is the modification factor at (i, j) node and Ca is the amount of modification. The intermediate values in between the data can be interpolated by linear, quadratic, or spline approximation along the tooth width and height, respectively.

The adjustment of the bevel gear models to any predetermined measurement grid points should now be possible by applying the topological modification. That is, the modification can be calculated as the deviation between the surface of the 3-D model and the measurement grid points of the target model. The measurement grid points report contains the Cartesian coordinates and the normal vectors of the grid points with the format of (XP YP ZP XN YN ZN). The reference coordinate system of the data is different according to the measurement machines. For example, the reference coordinate system of Klingelnberg format is using the convention shown in Figure 5. The order of the indexes for the points and the sections are defined according to ISO/TR 10064-6 (Ref. 5) as well as the convention from the manufacturers such as Klingelnberg (Ref. 6). Here the index of the lines starts from the root to the tip, and the index of the columns from Side II (heel) to Side I (toe).

In applying the modification, however, various problems have arisen. The definition of topological modification surface in helical gears is located between the tip and the root form diameters, but the diameters over the tooth width for bevel gears are changing.

On the other hand, the effort to transform the measured grid points to the format of the topological modifications is greatly increased. While the measurement direction of the distance between the two corresponding grid points for adjustment calculation is different from the normal of the tooth form (that is, the path of contact) along which the modification is applied. Moreover, even the deviation values are given correctly, we cannot easily reach to the exact surface points because the target modification can have highly nonlinear pattern.

Thus, the procedure to get the topological modification, so that the final model becomes equivalent with the target model, cannot be finished in just a single step but requires rather several iterations (Fig. 6). 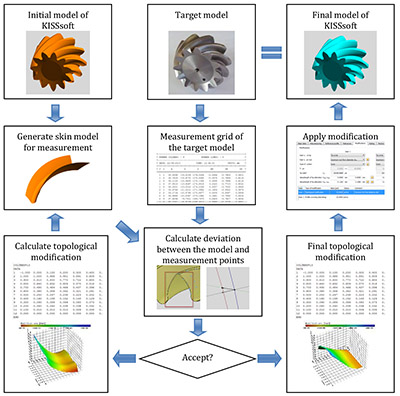 Figure 6 Procedure to get topological modification for target model.
- Click image to enlarge

In each step, the distance between the corresponding measurement points are calculated and converted into the dimension in the virtual cylindrical gear. Then the topological modification is calculated based on these values and applied to generate a new measurement grid. The procedure iterates until the given acceptance criteria are met. The acceptance criteria are given as the maximum distance between the surface of the 3-D model and the corresponding measurement points is smaller than the userdefined tolerance. 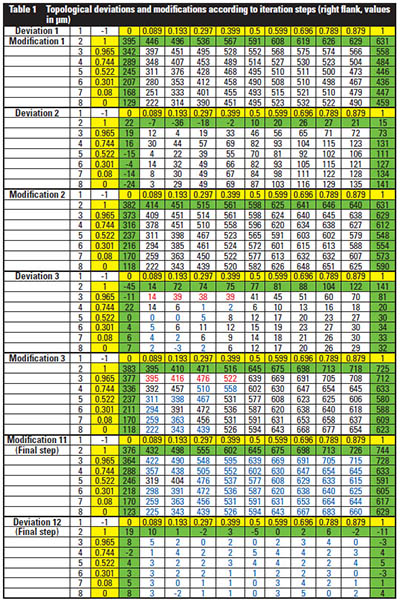 Step1. In the first step we measure the deviation by the normal distance between the measurement points of the Gleason model with the flank surface of 3-D model (see Deviation 1 in Table 1). Then, we use the Deviation 1 as the initial topological template, Modification 1. The green-colored fields in the table indicate the border of the tooth flank. In our modeling strategy we use a slightly bigger surface area to cover the real gear surface and it’s not possible to measure correct distances at the borders. Thus we ignore the border values in the acceptance checking in the calculation procedure and use the extrapolated values for the values. The maximum distance of the initial step gives 575 μm at the position (0.965, 0.696). The deviation shows relatively big values because we intentionally increased the tooth thickness of the KISSsoft model to completely cover the surface of the target model and to give positive distances. Thus, the final model is compensating not only the topological deviation of the surface but also the tooth thickness deviation of the model.

Step 11 (final step).We then needed to iterate 11 steps until all deviations fit into the acceptance criteria. You can find the final topological modification as Modification 11, and the final deviation as Deviation 12, in Table 1. Now all the deviation values are less than the maximum deviation of 5 μm — except the values at the border.

Topological Modification for the Left Flank 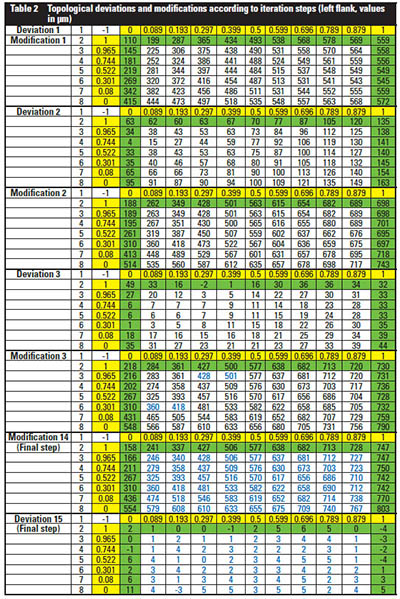 The developed method makes it possible to incorporate any desired flank form of a bevel gear given by grid points, and provides the model for the CAM machining in a very short time from the simplest way. That is, the macrogeometry is generally assumed by existing standards or data sheets, and the microgeometry is created by a difference of unmodified real flank-to-the-flank created by topological modifications with the help of KISSsoft. The results showed that the final flank with the topological modification gives the deviation of less than 5 μm, which can be ignored, considering the manufacturing tolerance in practical situations.

The method presented here has considerably high potential for practical usage because it allows not only the modeling of all existing flank forms into 3-D models, but also can be applied for various other purposes, such as to compensate hardening distortions and cutting deviations of 5-axis milling models. These are very important features in practice, and were unresolved issues in the 5-axis milling process.

Inho Bae, Ph.D, received his doctorate in 2002 from Hanyang University in Korea by the research on the design of multi-stage gearboxes. After working as a postdoctoral research fellow at Kyoto University, he moved in 2008 to KISSsoft AG in Switzerland as a development engineer. Dr. Bae is the head of technical support and also working on the development of the KISSsoft and KISSsys software suites.

Virgilio Schirru was trained as a mechanical engineer at the University of Cagliari in Italy and at the Glasgow University of Scotland. After working for M.g. Mini Gears S.p.a. in their sintering and cut steel department for cylindrical and bevel gears, Schirru joined KISSsoft AG as a support/development engineer