MS3D GearInspection Creates 3D Scan of Gears in Under 10 Seconds

In cooperation with various universities, the French manufacturer Mesure-Systems-3D (MS3D) has developed a contactless in line testing system for gears. With GearInspection, a gear with 23 gear teeth can be fully measured in 3D in less than 10 seconds. With 3D in line testing, the manufacturer obtains real-time information about the effects any changes to the production parameters will have. This is not possible through comparable checking with tactile measuring machines, which also take at least five minutes. GearInspection thereby enables optimization of the ongoing process.

MS3D's new inspection method can inspect and check every tooth of a gear in 3D in under 10 seconds. It thus makes sure that no faulty part gets through to final assembly and also gives information about defects in the process parameterization. Cylindrical straight, helical and bevel gears can be checked and measured using five sensors, which may be positioned differently depending on the diameter, module and helix angle of the gear. Each of the sensors digitizes part of the tooth flank surface, generating a dense cloud of points at the rhythm of 700 data points per 4 thousandths of a second.

One sensor measures the gear axis while the other four generate the points, which are then stitched together to get the complete surface data of all teeth flanks. Within a second, millions of data points are generated, from which a 3D model can be calculated. This point cloud is then used to identify the profile of the gear teeth, helix angle, helix curvature, diameter on flank, thickness of teeth and the pitch between the gear teeth.

The particular challenge of the geometry calculation using cloud of points generated by lasers is that the raw data is very "noisy" due to reflections of the laser on other areas (e.g. The opposite flank) or the high gloss of the surface (e.g. honed surfaces). If not eliminated, this noise leads to measuring imprecision and poor repeatability. This issue has been successfully overcome by specific algorithms developed by MS3D thanks to its 10 years' experience in dealing with in line non-contact inspection of complex metallic parts.

Saving the time spent to assemble a faulty gearbox, testing it, dismounting it, checking every gear individually to identify the faulty one and mounting the gearbox anew is one of the major benefits of using MS3D GearInspection in line. Return on Investment is estimated to be only a few months. Therefore, not only can manufacturers generate considerable savings, they can also give their customers a zero-defect guarantee. As the specifications of gears can differ according to applications, the machine has been designed with automobile manufacturers in mind, as well as gear subcontractor suppliers‘ requirements. GearInspection is currently suitable for gear diameters between 30 and 90mm. Besides this, further development for inline testing of gear axles is planned for 2016. 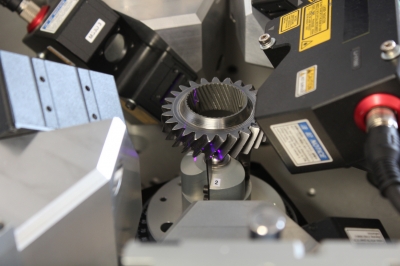