Junker has introduced the JUMAT 6S 18-20S-18, the latest of Junker's JUMAT series of modular grinding machines, which is capable of grinding the ID, OD and faces of a gear simultaneously. Junker's newest technology features up to four cross-axis systems in one machine, and each grinding spindle operates on its own separate X- and Z-axis, which allows up to four grinding wheels to operate at once.

Another primary feature of the JUMAT 6S 18-20S-18 is its center clamping workholding, composed of a hydrostatic mount and precision chucks, which negates the need to adjust parts to grind other surfaces. Parts are also automatically loaded by the machine's internal loading system, reducing errors in the grinding process.

The obvious benefit of Junker's newest machine is the shortened grinding time by fully grinding a workpiece in a single operation. With up to four wheels operating simultaneously and unobtrusive workholding, the 6S 18-20S-18 can fully grind gears in one operation, cutting down on both setup and grinding time in the shop. Grinding time itself can be reduced down to 45-55 seconds depending on the user's requirements and the size of the gear. This makes Junker's machine ideal for high volume gear manufacturing operations.

As an additional benefit, the 6S 18-20S-18 takes up less floor space due to the reduced amount of equipment needed to grind parts. According to Junker's President and CEO, Horst Zemp, the JUMAT 6S 18-20S-18 can be utilized for numerous different applications, but ring gears are the most common. In addition, the machine is modular and Junker can accept customer-specific requests with a lead time of roughly 12 months. 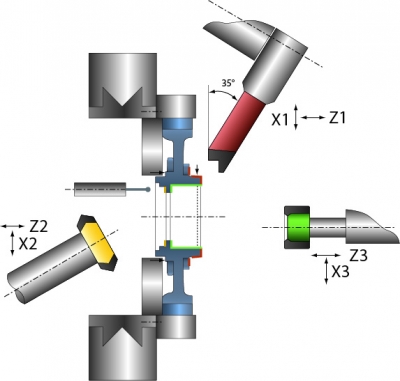