Gears must be manufactured to withstand extreme forces and challenging conditions, so hardness testing to determine material integrity is key. Understanding the different hardness testing types and systems can be useful to determine an optimal solution. Hardness testing functionality has evolved and now users can dial into world-class caliber instrumentation which more closely aligns with their applications at hand.

Regardless of the Rockwell scale or indenter being used, the overall Rockwell test procedure is the same. The majority of today’s newer machines automatically perform the entire test. Also, when leaving a mark or indentation is not an option, nondestructive ultrasonic technology can be used.

A user-friendly touchscreen interface can speed operations and the ability to use USB output to a flash drive is excellent for data mobility. There are options to apply the weight load such as on digital systems that use weights to apply the load or use a closed loop load cell to apply the weight load. The latter affords greater precision and repeatability. With a weight loaded system, the level of the machine is of great importance, so that the weights drop correctly. This is a less critical matter when using a load cell system.

Dolphin nose systems allow for the hardness testing of inner, as well as exterior, diameters. This allows for easier access to test gears, gear teeth and other hard to access areas. The systems are generally larger in size than other Bench Rockwell systems, offering greater testing heights and depths. Dolphin nose models offer a manual handle that activates the preload system, or an advanced Auto z-axis preload system. Using the Auto z-axis preload system, after placing the workpiece in testing position, the operator only needs to press the start button for the machine to complete the testing process.

Brinell hardness testing is commonly used for very large, porous testing of less hard metals, such as castings. Benchtop systems available today can handle the most popular Brinell hardness applications, and incorporate the latest innovative closedloop technology. A test load is applied via a closed-loop control unit with a load cell to apply weight loads up to 3,000 kg, a DC motor and an electronic measurement and control unit. The result is highly accurate Brinell hardness measurements at all test loads up to 0.5 percent. A common load overshoot or undershoot, also known as traditional dead weight or open-loop, system is eliminated. The absence of mechanical weights not only eliminates friction problems but also makes the equipment less sensitive to misalignments caused by vibrations. The systems are ideal for laboratories, workshops, tool rooms and inspection labs.

Software driven digital optical systems offer advantages over manual microscopes that are supplied with several hardness testing machines. Connected to a PC, laptop or tablet, the operator can push a single button to take automatic and instant measurements. All graphics can be saved, along with test results, in either word or excel formats.

Vickers/Knoop hardness testing is done on extremely thin/small workpieces, and often used for checking the hardness of layers, or platings and coatings on small parts in a laboratory environment. A high level of preparation is needed for such testing, including but not limited to, a high degree of polishing.

There are three types of turret control including a basic manual turret for changing from optics to indentation and back to optics for measuring. A second type incorporates an automatic turret, giving operators greater freedom to change the turret position by a button on the tester keypad. The most popular Vickers/Knoop hardness testers have a turret control option using software to control the entire test with a one-click process using calibrated auto edge detection. Precision video and measurement software also allows for clicking of the indent edges in software, then deriving a hardness reading on screen.

Vickers hardness testers are generally operated in a lab type environment and will do tests nondestructively. A high level of surface finish preparation is required, and the test process is slow, though it can be automated. This scenario is ideal for gear inspection/testing in a post-production line process.

Shore Portable hardness testers are targeted for testing materials such as rubber, soft plastics and leather, and versions are also available for the testing of hard plastics such as bowling balls and hard hats. Electronic durometers for measuring Shore A and Shore D values are designed to fit comfortably and firmly in a user’s hand. A large LED display and simple 3 button control make this device easy to use.

There are two popular digital methods of portable hardness testing. The first is “dynamic impact,” based on the Leeb principle of hardness, developed by DietMar Leeb in the 1970s. A spring loaded impact body is thrust to the test surface, affecting rebound. Initial thrust and rebound speed is measured in a noncontact mode, and is calculated as a Leeb hardness value and then automatically converted to Rockwell C, B, Brinell, Vickers and Shore Values. Also, the portable benefit means the tester can be brought to the workpiece, which is especially useful when testing large and/ or cumbersome parts. This method has resulted in efficient, fast and accurate portable hardness testing results. 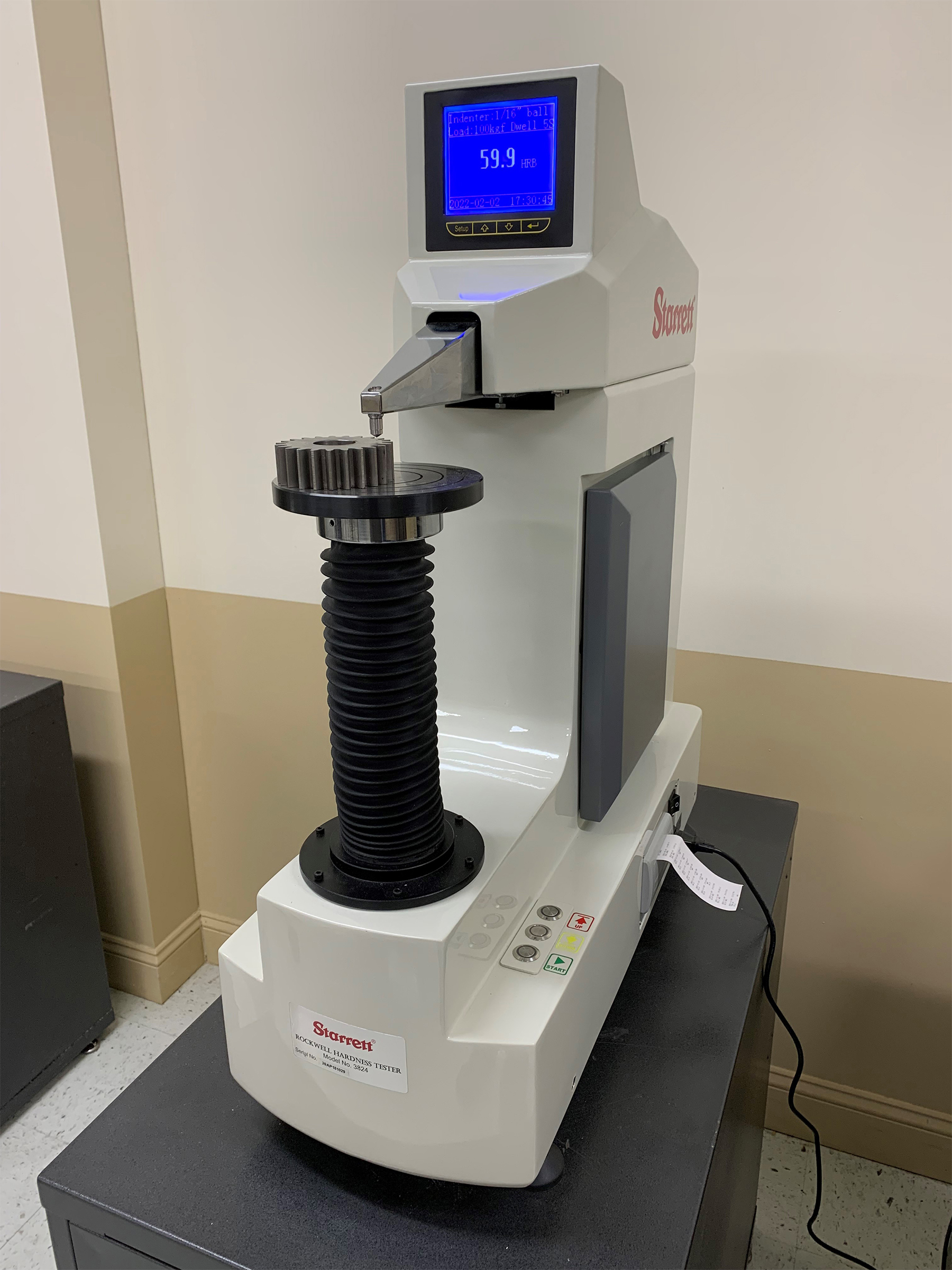 However, when a mark or indentation on the workpiece must be avoided, ultrasonic testing is a great solution. Advanced nondestructive portable hardness testers utilize ultrasonics with Ultrasonic Contact Impedance (UCI) technology, enabling a portable hardness tester to test special surfaces on small and thin workpieces without marking the surface. These units can test metals as thin as 2 mm throughout all scales, hard or soft. UCI technology is available on both manual and motorized systems. The motorized probe systems are used for very thin testing of coatings and platings, or surfaces with a very high polish finish.

Ultrasonic portable hardness testers probably offer the best of most worlds for gear inspection/ testing. Testing can be done from any angle, while getting into very tight spaces often found in gears. Because testing can be done nondestructively, whether you are checking material or platings, tests can be accomplished without leaving a mark on most metals. The speed of the UCI tests is approximately 2 seconds. In addition, workload can be automated using fixturing and a stand to hold the probe in place, allowing for rapid, continuous testing. 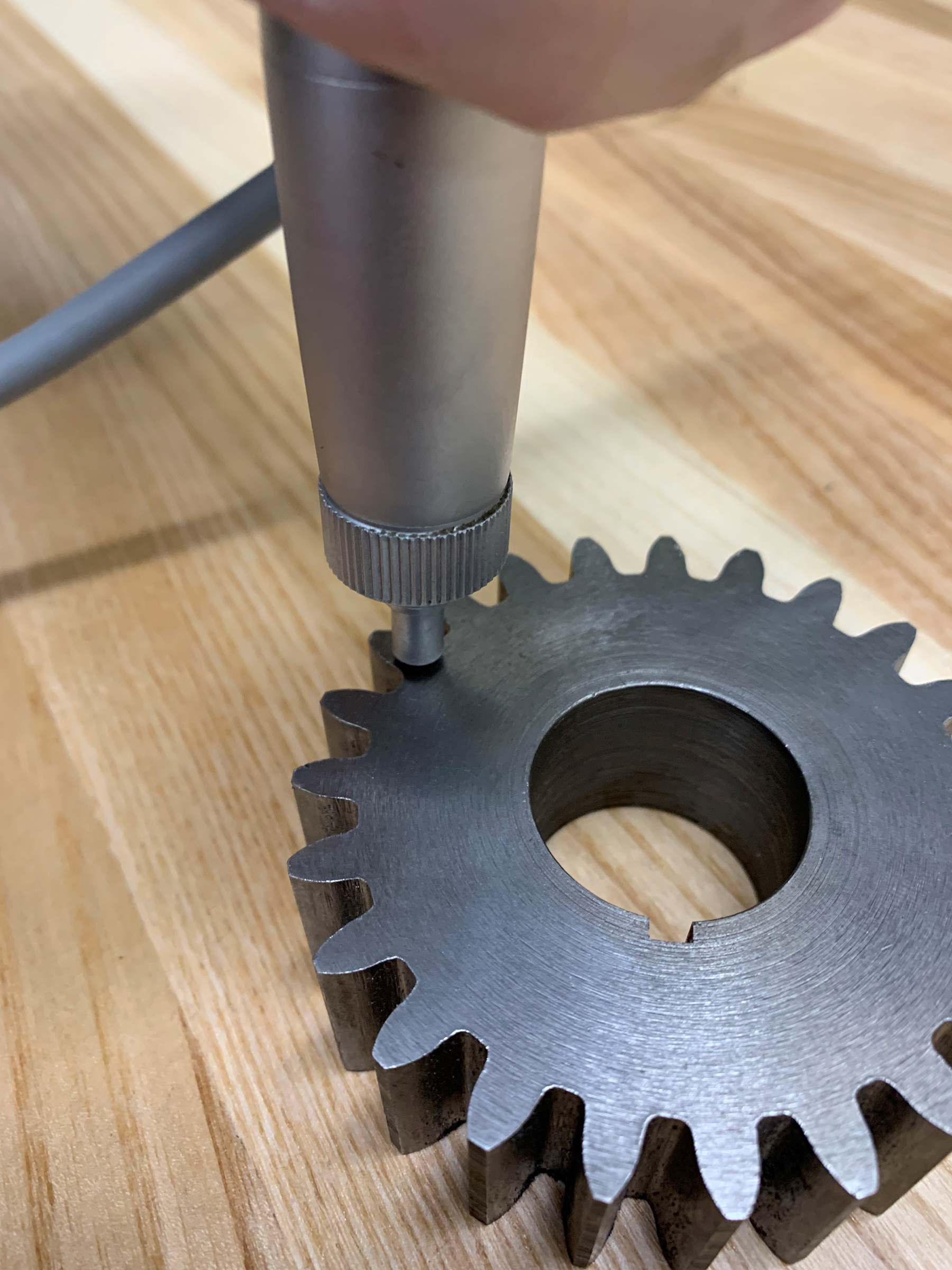 Starrett 3821 Ultrasonic Portable Hardness Tester will test gear teeth nondestructively and can read in just about any scale at about two seconds.

UCI is based on a 136-degree diamond at the end of a vibrating rod being depressed into the test surface at a fixed load. The difference in Ultrasonic vibration frequency is then calculated into a hardness value. The UCI test procedure is slower than the Dynamic Impact style, however the UCI method has the advantages of being nondestructive and able to test thin and small work parts.

Previously, destructive indentations made on such sample pieces meant the garbage heap for those tested. Using ultrasonics, this is no longer the outcome. These systems have an open architecture and can be calibrated to read any metal, in any hardness scale, with reference samples to perform initial calibration. Ultrasonic portable hardness testing is ideal for applications such as gears, bearings, pistons and valves, among many others. Key industries for this type of testing include aerospace, automotive and medical parts as well as knife blade manufacturing, to name just a few.