Nanofluid improves machine performance one particle at a time

There’s a complacency some machine operators can contract over time when presented a new product or machine tool workaround. These new advancements don’t necessarily frighten, it’s more a case that when an operation works well it’s advantageous to leave well enough alone. While many engineers prefer to keep things simple, safe and risk-free, occasionally a new technology offers a unique opportunity to increase productivity. 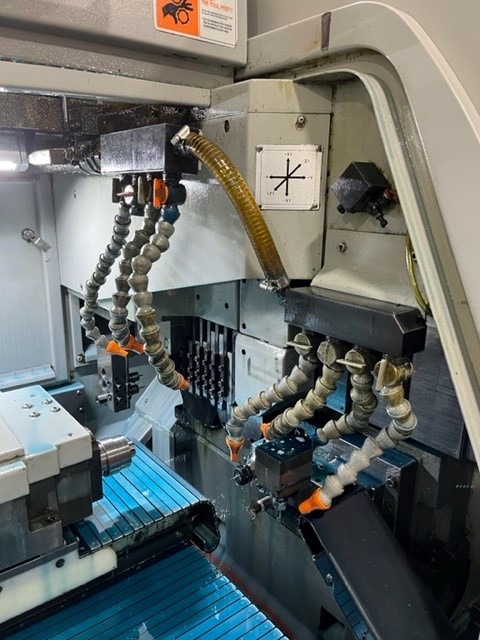 Tool-X is a nanofluid that changes the characteristics of existing metalworking fluids by ‘manipulating’ speeds, feeds and metal removal rates using nanotechnology. The science behind Tool-X can potentially change metal cutting dynamics, improve surface finishes and extend tool life. The backstory of this technology is just as fascinating as its production results.

There’s a specialized group of scientists and engineers that think on a microscopic level — atoms, molecules, your basic nanotechnology fundamentals. Jim English, president of Tool-X, knows a thing or two about trying to explain the benefits of nanotechnology to potential customers in manufacturing.

“First, it’s extremely heavy on the science,” English said. “As you’re talking about chemical reactions at the microscopic level to a customer you start losing them. The explanation of the process takes longer than the actual process itself.”

For this reason, English has been known in the past to refer to the technology as ‘magic dust’ and prefers to go straight to discussing production gains. A brief explanation, however, works to convey what Tool-X really is and what it can do for a gear shop.

Some of the most fascinating carbon forms in the scientific world are nano-onions. In short, these nanostructures possess great versatility and applicability in areas like medicine, material science, additive manufacturing, plastics, packaging, and nano lubricants. An enlarged photo of a nano-onion looks like an onion sliced right down the middle, hence its name.

“The best way to describe how Tool-X works is the DNA cartoon from the film Jurassic Park,” English said. “We’re taking carbon through a nanoreactor and making different blocks of carbon with different DNA. I tend to use LEGO blocks to explain how we modify and manipulate these carbon blocks.”

English said that Tool-X carbon nanoparticles work in both cutting oil and water-based metalworking fluids. The physical properties of the carbon nanoparticles enhance both cutting tool and metalworking fluid performance by reducing the friction between the blade and the chips, conducting heat away from the cutting edge of the tool, removing build-up on the contact surfaces and strain hardening (shot peening) the metal surfaces of the tool. These inert nanoparticles withstand high temperatures and don’t break down. To the naked eye, these particles look like dirt, but there’s much more going on under the surface.

Tool-X (2003) was originally developed by the U.S. government and brought to the public through a technology transfer program that included the invention of undershirts, sunglasses, synthetic rubber, microwave ovens, GPS and M&Ms — yes, it’s true that our favorite hard-shelled candies were given to American soldiers as rations during World War II due to their heat-resistance before appearing in candy aisles.

Another government-led transfer program was Rain-X, the water beading technology that used a hydrophobic silicone polymer to force rain off windshields. This is ultimately the technology that opened the door for Tool-X in manufacturing applications.

“Engineers and scientists need to know the why and the how. How does it work? Why does it work? This is one of the most challenging aspects because they don’t understand how a nanofluid like Tool-X can improve productivity,” English said. 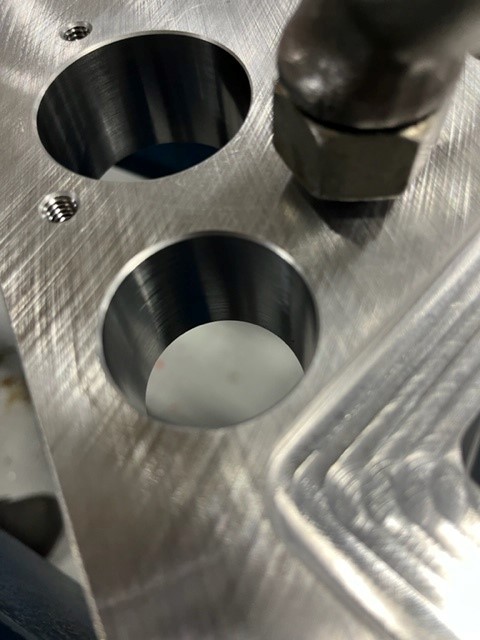 “My son, for example, graduated from college with a biology degree and a teaching certificate. There wasn’t a single class on nanotechnology or any mention of the technology throughout his college career. It’s discussed more in the medical field, but there’s still a disconnect here,” English said.

These nanofluids can enhance the thermal conductivity and tribological characteristics in cutting tool applications by reducing friction, lowering tool wear and improving the surface quality of components including gears.

Tool-X has also proven to allow a lower chemical footprint, making it easier for manufacturers to conform to ISO 14001:2015 standards to keep plants clean and healthy for employees. Sustainability and green manufacturing are additional areas the United States tends to trail Europe and Asia.

Nanotechnology, in fact, is one of the key enabling technologies to play a significant role in sustainability in the coming years. It is supported by the United Nations’ Sustainable Development Goals in varying fields such as natural sciences, medicine, agriculture, communications and manufacturing.

“Tool-X doesn’t smell and it doesn’t create bacteria,” English added. “We use less additives than other products on the market because we don’t need all the additional chemicals.”

The EPA went after many of the chemicals used in machine shops in the 1990s. This continues today as new regulations overhaul rules governing thousands of chemical products for consumers, manufacturers and scientists alike.

“Chemists looking to blend new formulas and create new compounds are running out of options. How many tricks do they have left up their sleeves?” English asked.

For a better understanding of the benefits of this nanofluid, we examined two separate case studies — one for a manufacturing plant in Michigan currently using the product and the other from a hobbing operation at General Motors.

4M Industries (Livonia, Michigan) is a precision machine shop serving a variety of industries including aerospace, automotive, medical and weaponry. Due to the critical nature of the components produced at 4M, reliability and consistency are vital to the success of the operation. 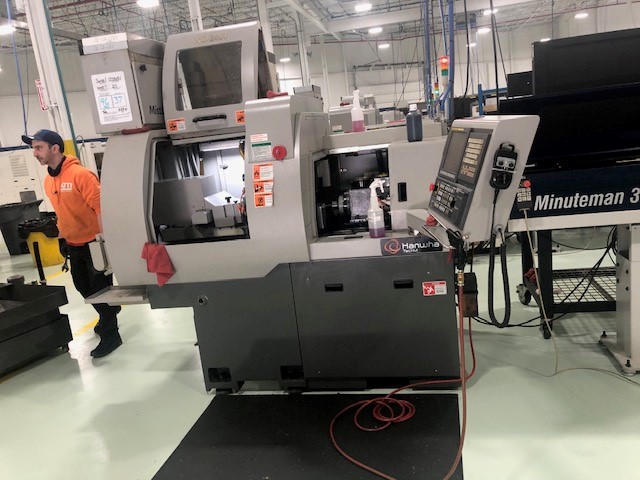 “COVID was not a factor in slowing our workload down,” said Stuart Palm, production manager at 4M Industries. “In fact, we were busier at the height of the pandemic.”

Palm stated that the company does not have a sales team trying to find new customers. “We get pretty much all our new business from word of mouth. They come back because of the consistency of our products and our personnel.”

These products are maintained by consistently looking at different ways to improve production on the shop floor. Tim Adams, CNC machining specialist at 4M Industries, was the first person on staff to research the potential of Tool-X.

“I was very familiar with the technology because of Rain-X,” Adams said. “We read about Tool-X in a trade magazine and inquired about setting up some tests in our facility. The coolant that was being used prior to Tool-X was not meeting 4M’s quality requirements.”

Adams said the changeover to Tool-X was easy. “The biggest challenges were cleaning the machines completely prior to the switchover and training. Basically, the entire staff needed to learn how this process was different from past coolants used in our machines.”

Once Tool-X was implemented, the company saw immediate results.

4M was able to shave off about 40 percent of its cycle time using Tool-X. The company also saw a significant increase in its milling feeds. “The productivity gains were apparent right from the start,” Adams added.

He was also surprised at how clean the machines stayed after using Tool-X versus the previous products. “The chips don’t hang-up in the machines and there’s no wax buildup. The nanofluid helps maintain machine cleanliness during operation which is a bonus,” Adams said.

4M is using the technology on its lathes, band saws and in the company’s tapping fluid. Adams said they’ve been able to keep the same saw blade in operation for over a year. They produce steel, aluminum and stainless-steel components for the aerospace industry using Tool-X.

As previously mentioned, the low chemical footprint and clean attributes of Tool-X are the reasons Adams believes other shop floors should consider implementation.

“We have a sister building across the street running the old coolant on the machines and the smell hits you when you walk in the door. There’s almost a constant vapor in the air. Our building is not like that at all,” Adams said.

Everything is more consistent now on the 4M machine floor. The tools last longer, the machines run faster and the air is cleaner. It looks nothing like the dirty, grimy, soot-filled manufacturing floors of the past.

GM utilized Tool-X for a hobbing operation for the manufacture of ring gears. This production ran for three years and eight months. According to English, GM increased tool life from 867 parts per tool to 3,813 parts per tool during this timeframe. Scrap savings decreased by $3,072 per machine with productivity savings of $22,624 per machine. The consistency and predictability of the production lines during the testing period were more than enough to convince executives that the same machines and operations could be upgraded using Tool-X.

In a recent presentation for AGMA’s Emerging Technologies webinar series, English examined tool and coolant costs before and after GM utilized Tool-X. The production increase was noteworthy.

It’s All Chemistry and Mathematics

It’s a tough concept in manufacturing to suggest a product improves with longevity. Typically, machine tools need to be upgraded, tools resharpened and oils replaced. This — English reiterated — is where Tool-X can surprise customers.

He said that many issues occur in manufacturing because the oil changes month to month.

“One minute a machine shop is getting its oil overseas, then they run out and they’re buying from Alaska, then overseas again. These oils are never the same grades. So, you need an additive package to bring it up to application standards. And then you start the process all over again next month.”

Nanofluid — in contrast — performs better the longer it’s being used.

“In the GM case study, they couldn’t figure out how the numbers improved so much over time,” English said. “They thought we were adding something to the mixture. Truth is we set up a thirty-day test and it continued to improve over a period of three years. Greater production efficiency is a nice problem to have. Sometimes a technology comes along that challenges the status quo and suggests it’s time for a production process to change.”

This brings us back to the gear industry’s “if it ain’t broke, don’t fix it” mentality. It is changing. It’s safe to say that the next generation becoming executives appears open to trying new things and improving production processes. The leaders speaking up during webinars, trade shows and shop visits realize the importance of upgrading equipment to prepare for our tech-heavy manufacturing future. Tool-X is another example of a program that started out hush-hush in the government but can now offer significant benefits in gear manufacturing.

“The bang for your buck is actually greater in gear manufacturing than other areas,” English said. “Tool-X can provide an alternative to lubricants that are not meeting the demands of five-axis machining, carbide tooling, etc. It’s a technology that can benefit all the other new machining technologies that are being implemented in today’s machine shop.”