Home » Blogs » Gear Talk With Chuck » How Old is Your Machinery’s Handbook?

Chuck Schultz is a licensed engineer, Gear Technology Technical Editor, and Chief Engineer for Beyta Gear Service. He has written the "Gear Talk with Chuck" blog for Gear Technology since 2014.

How Old is Your Machinery’s Handbook? 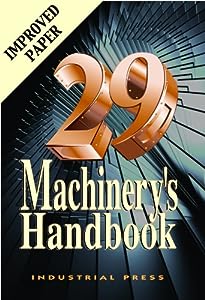 Machinery's Handbook, 29th edition[/caption] [starbox] When discussing influential books on gears, I like to start with the venerable Machinery’s Handbook. No matter where you go in the industrial world you’ll find well thumbed copies of this handy reference book. My long time friend and noted gear engineer Ed Hahlbeck was fond of saying that if he was ever ship wrecked on a desert island he hoped his Machinery’s Handbook washed ashore too. I have a 21st century copy in my library right along side the 1928 edition I bought for a dollar at an estate sale. The gear trade and general industry owe a big thank you to Franklin D. Jones and Erik Oberg for first publishing this reference in 1914 and for updating it every few years. Mr. Jones died in 1967 at the age of 88 but even the latest electronic versions still carry his name. He was a prolific writer/editor and I am a fan of two of his other books as well. Gear Design Simplified is a great guide for beginning gear people. The three volume Ingenious Mechanisms for Engineers and Designers is at the opposite end of the complexity scale but certainly shows the creativity of the people who worked in our trade before slide rules, calculators, and computer aided design. I wonder if the publishers will have a special 100th Anniversary edition? Are there any other scientific or engineering reference books that have been in continuous use for that long? At one point I had a complete set of Gear Technology back issues but unfortunately they got damaged in one of my many moves. On line access to the contents diminishes that loss but I tend to agree with Ed; finding a Machinery’s Handbook is a good first step in resolving many shop problems.

Thank you for this - Happy Saint Patrick's...