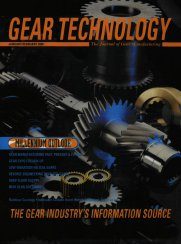 Michael Goldstein
I learned much of what I know about the machine tool business from my father, who learned it from his father before him. One of the lessons he taught was that no matter how important the details seem, it's equally important to look at the bigger picture.
Read More

Many people seem to be counting this year's Gear Expo in Nashville as a resounding success. There were 180 American and international exhibitors occupying over 50,000 square feet of exhibit space in the Nashville Convention Center, with total attendance of 2,700. This figure is dramatically down from past shows but that doesn't seem to be an issue with the show organizers. According to Kurt Medert, vice president of AGMA;s Administrative Division, even though attendance was off from the 1997 show, the exhibitors were pleased with the quality of the people who did come to the show. "This was an excellent show for us," said Marty Woodhouse, vice president of sales for Star Cutter Company and chairman of AGMA's Gear Expo committee. "Our customer base was there and they came to buy. It was very active."
Read More

Roughly 100 years ago, Cornelius J. Brosnan of Springfield, Massachusetts, invented and received the first U.S. patent for a paper clip. At about the same time, his fellow inventors were coming up with such marvels as the zipper, the safety razor and the typewriter.
Read More

Designing a gear set implies a considerable effort in the determination of the geometry that fulfills the requirements of load capacity, reliability, durability, size, etc. When the objective is to design a new set of gears, there are many alternatives for the design, and the designer has the freedom to choose among them. Reverse engineering implies an even bigger challenge to the designer, because the problem involves already manufactured gears whose geometry is generally unknown. In this case, the designer needs to know the exact geometry of the actual gears in order to have a reference for the design.
Read More

Helical gear pairs with narrow face width can be theoretically classified into three categories over the contact ration domain whose abscissa is the transverse contact ration and whose ordinate is the overlap contact ratio. There is a direct relation between vibration magnitude and shaft parallelism deviation. To clarify the effect of the tooth deviation types on the vibration behavior of helical gear pairs, performance diagrams on vibration are introduced. the acceleration levels of gear pairs are shown by contour lines on the contact ratio domain. Finally, the performance of gears with bias-in and bias-out modifications is discussed considering the effect of the shaft parallelism deviation with use of the developed simulator on a helical gear unit. It becomes clear that there is an asymmetrical feature on the relation between the vibration magnitude of a gear pair and the direction of each deviation.
Read More

Saginaw, Michigan, may be home to the only gear operation in the world that requires the use of a Zamboni machine. It may also be the only place in the world where teeth on the Gears are optional.
Read More

Welcome to our Product News page. Here we feature new products of interest to the gear and gear products markets.
Read More

Welcome to Revolutions, the column that brings you the latest, most up-to-date and easy-to-read information about the people and technology of the gear industry.
Read More