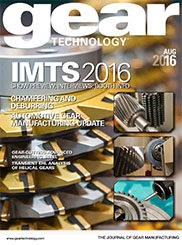 Chicagoans are very particular about their hot dogs. To begin with, it has to be an all-beef product, served on a steamed poppy seed bun. But just as important are the essential toppings. If you walk into a proper Chicago hot dog stand and order it "Chicago Style," you'll get exactly these seven ingredients on your dog: yellow mustard, chopped white onions, neon green pickle relish, a dill pickle spear, tomato wedges, sport peppers and, of course, celery salt.
Read More

Chamfering and Deburring - the Underrated Process

Chamfering and deburring of cylindrical gears does not get much love from manufacturers. The process is seen as a necessary evil since it is adding cost without adding value. However, there are good reasons for not underrating this important auxiliary process. Chamfering and deburring takes care of several issues which may come up during the manufacture of quality gears.
Read More

Peter Eelman has been involved with the International Manufacturing Technology Show for more than 30 years. First as an exhibitor with Warner & Swasey Co.; later with Toyoda USA; later still as a consultant; and currently as vice president for exhibitions and business development, IMTS. He also serves on the board of directors of the exhibitor-appointed Contractor Association and is a former member of the board of directors for the Trade Show Exhibitors Association. Eelman is a speaker with the International Association of Exhibitions and Events and serves on the Metropolitan Chicago Pier & Exposition Authority Labor Council. As the head of IMTS, Eelman is the go-to, make-things-happen guy for the Chicago Convention and Tourism Bureau, the Metropolitan Pier and Exposition Authority, McCormick Place and the various vendors, service providers and trade unions involved in the complex trade show process. In addition to IMTS, Eelman is also prominently involved in shows with an international presence.
Read More

The suppliers of products or services that may be of interest to gear manufacturers who visit IMTS 2016.
Read More

Comprehensive descriptions of what you will find in the booths of many leading gear industry suppliers at IMTS 2016.
Read More

Our special advertising section featuring some of the premier gear industry suppliers at IMTS 2016.
Read More

This paper addresses the lubrication of helical gears - especially those factors influencing lubricant film thickness and pressure. Contact between gear teeth is protected by the elastohydrodynamic lubrication (EHL) mechanism that occurs between nonconforming contact when pressure is high enough to cause large increases in lubricant viscosity due to the pressure-viscosity effect, and changes of component shape due to elastic deflection. Acting together, these effects lead to oil films that are stiff enough to separate the contacting surfaces and thus prevent significant metal-to-metal contact occurring in a well-designed gear pair.
Read More

The increasing demands in the automotive industry for weight reduction, fuel efficiency and a reduced carbon footprint need to be addressed urgently. Up until now, widely used conventional steels have lived up to expectations. However, with more stringent emissions standards, demands on materials are increasing. Materials are expected to perform better, resulting in a need for increased fatigue strength. A possibility to increase torque on current generations without design changes can be achieved by selecting suitable materials.
Read More

What Was He Thinking

Having read about an automobile race in France, Kohlsaat decided he'd host America's first auto race in Chicago. The year was 1895 and automobiles were still a great curiosity. Kohlsaat, owner/publisher of the Chicago Times Herald, planned to exploit the growing interest in motoring by sponsoring a 54-mile race from downtown Chicago to nearby suburb Evanston, Illinois, and back. The match was open to all comers, foreign or domestic, whether powered by gas, electricity, or steam. The top prize: $2,000 (that's 50,000 2016 dollars).
Read More

News about the latest products in the industry.
Read More

News from around the Industry
Read More

In terms of the tooth thickness, should we use the formulation with respect to normal or transverse coordinate system? When normalizing this thickness in order to normalize the backlash (backlash parameter), we should divide by the circular pitch. Thus, when normalizing, should this circular pitch be defined in the normal or traverse coordinate system, depending on which formulation has been used? Is the backlash parameter always defined with respect to the tangential plane or normal plane for helical gears?
Read More
Free Gear Technology Subscriptions
Subscribe
Free Gear Technology Subscriptions
Subscribe
FEATURED VIDEO
RECOMMENDED