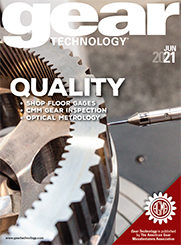 How Do You Make the Perfect Gear

Randy Stott
Okay, I'll admit it. It's a trick question, because of course there's no such thing as a perfect gear. There will always be manufacturing errors, inconsistencies and human error. Tools and machines wear down, so that the first gear you produce will always be different from the one hundredth.
Read More

An overview of tactile and optical gear metrology
Read More

When it comes to modern gear measurement, there are still essentially two primary tools that shops use. The first is a machine dedicated solely to measuring gears, which had been the primary method for many years, until recently.
Read More

Given the lack of information on thermal distortion effects in small size steel gears, an experimental study of quasi-static transmission error behavior under thermomechanical conditions is presented.
Read More

Not Your Average Drone Delivery

It’s getting complicated. First it was the Amazon packages dropping into the backyard via an unmanned vehicle. This was followed by numerous companies working on autonomous vehicles for buses, taxis and even two-seater air shuttles. Now, a prototype unmanned aerial tanker refueled a F/A-18F Super Hornet fighter jet in early June. That’s right—a drone just refueled a fighter jet in mid-air.
Read More