Prior to receiving airworthiness certification, extensive testing is required during the development of rotary wing aircraft drive systems. Many of these tests are conducted to demonstrate the drive system’s ability to operate at extreme conditions, i.e. — beyond that called for in the normal to maximum power operating range.

One of the most extreme tests is referred to as the “loss-of-lubrication” or “run dry” test.

Failure of this test can lead to a partial redesign of the drive system or the addition of an emergency lubrication system. Either of these solutions can greatly increase the aircraft drive system cost and weight — and extend the schedule for obtaining airworthiness certification. Recent work at NASA Glenn Research Center (Cleveland, OH) focused on performing tests in a relevant aerospace environment in order to simulate the behavior of spur gears under loss-of-lubrication conditions. Recent testing has focused on newer aerospace gear steels and imbedding thermocouples in the shrouding to measure the air/oil temperatures flung off the gear teeth.

The data from these two types of measurements provided important information as to the thermal environment during the loss-of-lubrication event. This data is necessary to validate ongoing modeling efforts.

As mentioned, the drive system used in rotorcraft applications is required to pass a 30-minute loss-of-lubrication test prior to aircraft certification. This means that the drive system must continue to operate for 30 minutes with the primary lubrication system inoperative (Ref. 1). To achieve this capability, gears become extremely susceptible to failure due to a starved lubrication condition. High load, high pitch line velocity — or the combination of both — can cause the gears, due to the meshing process, to heat to the point of failing.

Failure mechanisms of gear contacts are summarized in Figure 1 (Ref. 2). Here, two of the mechanisms are of most importance for loss-of-lubrication; the first is the wear region where extreme loading at slower sliding speeds under starved lubrication conditions generates sufficient heat to expedite wear; the other region is the scoring region where high relative sliding of the teeth influences the heat being generated. In either case the friction coefficient increases due to the loss of the full elastohydrodynamic fluid film — thus increasing the heat generation rate. 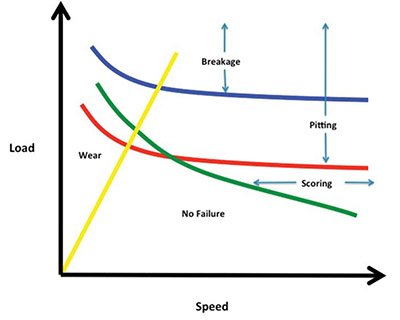 Recent studies (Refs. 3–5) made initial attempts at evaluating the loss-of-lubrication behavior of tested components typically used at NASA Glenn for contact fatigue studies. In prior and current NASA testing, all tests were run in a dry-sump manor, where all lubrication is jet-fed and gravity-drained. This type of lubrication system results in efficient operation of the drive system and is the lubrication mode typical in all rotorcraft main transmissions.

In these prior tests many aspects were considered, including run-dry conditions, vapor-mist lubrication, grease lubrication, test gearbox drainage, and shrouding. These results indicated that testing in a relevant environment was essential for the generation of useful results; therefore the current test arrangement evolved to represent an aerospace environment. Gear shrouding was used in all tests conducted in this paper.

The test results described in this paper document the ongoing research assessment of aerospace-quality components subjected to loss-of-lubrication conditions. Static instrumentation located in the gear shrouding was used on all tests. Also, one test gear was instrumented with thermocouples to provide temperature data on the gear. This gear was subjected to normal and loss-oflubrication conditions. Results from these tests are described in this report. 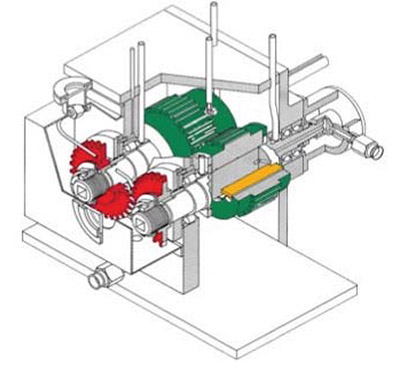 The facility is a torque regenerative test rig that locks torque in the loop via rotating torque applier. The test gears have a 1:1 ratio. Facility speed and torque can be varied as needed during a test. The basic gear design information of the tested gears is listed in Table 1. 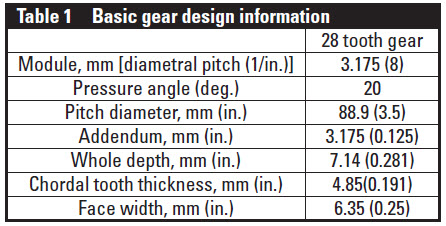 As previously mentioned, the facility went through an evolutionary period (Ref. 5) where shrouding, visual access, gearbox lubricant removal, and instrumentation were added to the test section . A photograph of the current test gearbox arrangement is shown in Figure 3. 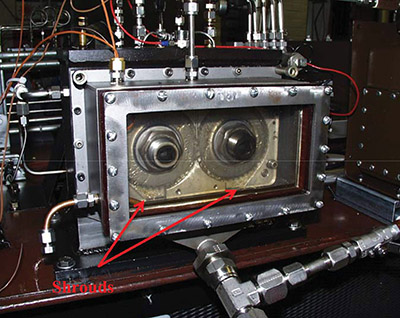 Static shroud thermocouples were utilized during all tests. High-temperature glass was also utilized as the outside shroud to encase the gears. Ballistic plastic and another layer of hightemperature glass provided visual (and video) access to the gears during operation. Lubricant for normal operation was fed at the into-mesh location through part of the shroud (Fig. 4). The normal operational flow rate was approximately 0.42 l/min (0.11 gpm), at 207 kPa (30 psig) jet pressure, with the lubricant inlet temperature of ~110°C (230°F). Instrumentation and normal lubricant jet locations are shown (Fig. 4). A turbine engine with drive system lubricant MIL-L-85734 was used during the testing at hand. 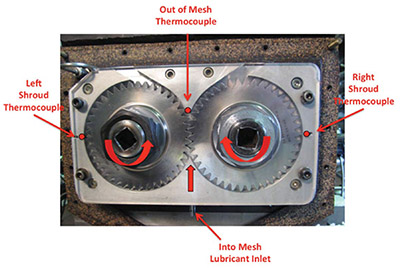 Prior to the reported loss-of-lubrication testing, the gears were broken-in to allow normal run-in wear to occur. The gears were operated for at least 1 hour at ~50 percent maximum torque and at full facility speed (10,000 rpm). After this period the load was then increased to the maximum load and run for at least several more hours prior to conducting a loss-of-lubrication test. Most tests were run until the teeth failed to continue to carry torque (plastically deformed), or were stopped just prior to this condition. During all tests the static instrumentation and live video were carefully monitored. Data from all sensors were collected at 1 Hz and stored for post-processing.

Testing and Discussion of Results

The test results described in this report were from the same lot of gears manufactured to the basic gear design information provided in Table 1. The gear material was an aerospace gear steel (Ref. 9) that was carburized and final-ground; the surface roughness was 0.41 micro-meters (16 micro-inch) or better. The gears have some tip relief starting at the highest point of singletooth contact and a small amount of crowning across the face width that is symmetric.

Five test results are described in this report. The tests in the loss-of-lubrication condition were conducted at one of two load levels, and are documented in Table 2. The basic gear design information, along with the load level, produced maximum levels of bending and contact stress, found via the analysis technique in Reference 10.

An example of each of the two load levels will now be described.

At the lower level of the two loads, two tests were conducted with the loss-of-lubrication time of 40.8 and 43.1 min in length. The data from the static thermocouples imbedded in the shrouds, along with other facility temperatures, is shown in Figure 5. 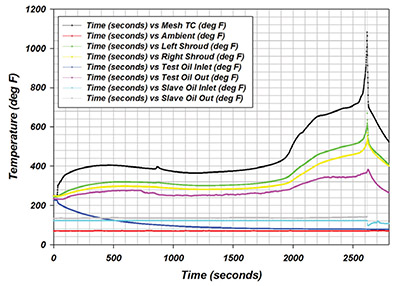 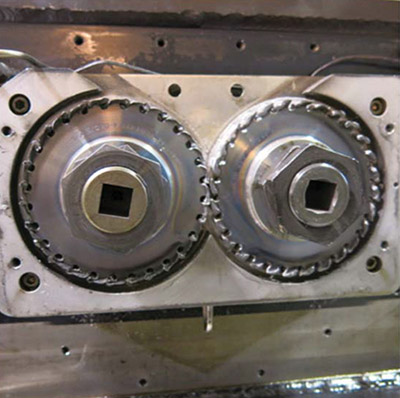 The gears in the post-test condition are shown in Figure 6. Note that the test was conducted until the gear tooth meshing heat generation and resultant temperature were high enough to plastically deform the gear teeth. This type of post-test condition occurred whenever the test was permitted to continue until total loss-of-torque-delivery was achieved; a typical loss-oflubrication failure at this condition is shown (Fig. 7). 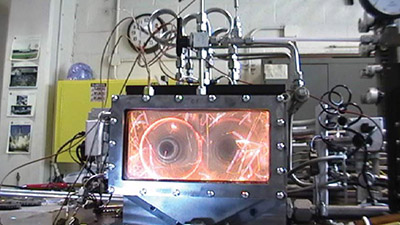 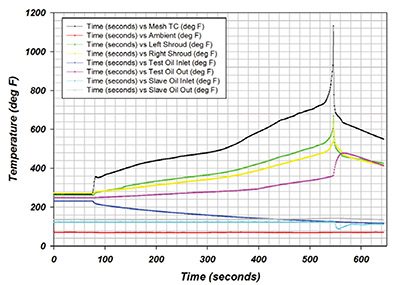 Two other tests were conducted at an elevated level of load, i.e. — ~83.6 N*m (740 in*lb). These tests, in the loss-of-lubrication mode, produced failures in 7.9 and 9.2 minutes. The test temperature data from the 7.9-minute loss-of-lubrication test is shown (Fig. 8). As can be seen from this data, the temperature did not reach an increased steady-state condition prior to increasing to failure, as it did in the test shown in Figure 5. After the primary lubrication system was disconnected, the temperature just continued to rise. The post-test condition of the test gears is shown (Fig. 9) with the gearbox cover removed. 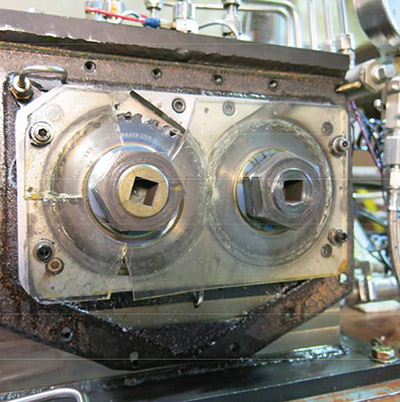 The most desired test for loss-of-lubrication behavior includes employing on-component information. While it would be of great benefit to have instrumentation at the gear-meshing sur-face, this has been shown to be very difficult to accomplish. Even with full elastohydrodynamic film, the lubricant viscosity of turbine engine lubricants — as used in rotorcraft drive systems — is insufficient to develop films thick enough to keep the on-surface instrumentation from wearing away. Therefore thermocouples were installed at locations in areas of the gear where contact does not occur. 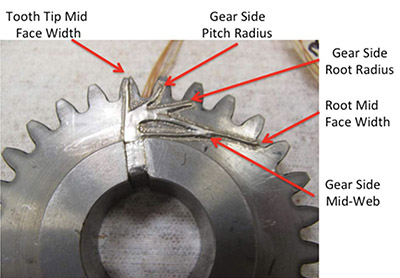 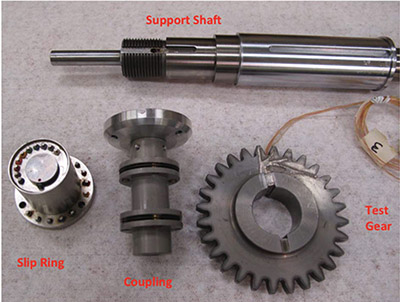 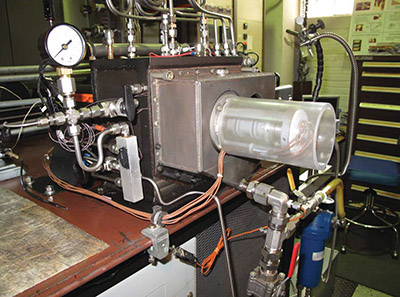 The initial data for warm-up and operation of the facility in the normal-to-loss-of-lubrication mode is shown (Fig. 13). 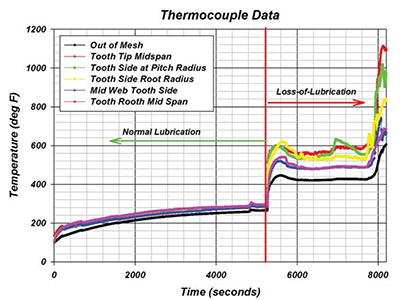 During this same test the lubricant was shut off and the test run until failure. The data from loss-of-lubrication initiation to failure for the shroud (static) and other facility thermocouples is shown (Fig. 14). 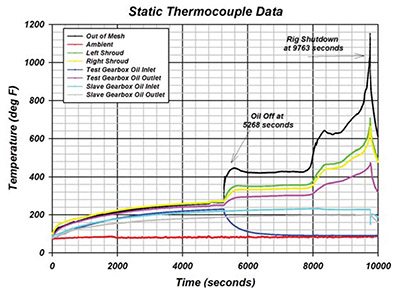 The data in Figures 13 and 14 indicate that the bulk temperatures of the gear were exceeding the temperature that was found from the static shroud thermocouples. In the normal lubrication condition this value was 20 to 40°F — depending on the location. In loss-of-lubrication mode this amount was as much as 500°F higher on the gear than that of the static shroud thermocouples. In Figure 13 the data beyond 8,200" is believed to be invalid due to post-test inspection of the thermocouple wiring that was melted together at the common locations through the shaft. The thermocouple wiring coating was exposed to bulk temperatures in the gear beyond the melting point of the wire coating.

The post-test condition of the gears used in this test is shown (Fig. 15). What can be noted is that a bending failure occurred before the loss-of-lubrication test — as the failed tooth has no evidence of running in this post-test condition. A hypothesis is that tooth failure was initiated by a spot-weld in the root fillet region from the thin metal protection strap that was used to cover the thermocouple wiring. 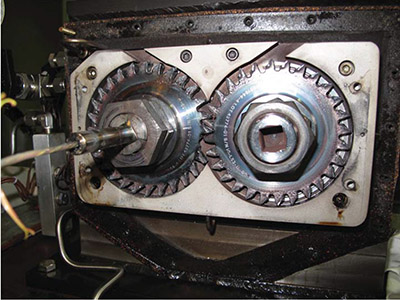 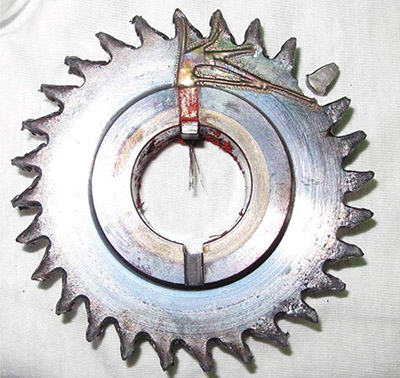 In Figure 16 the tooth that failed in bending shows no apparent damage from loss-of-lubrication, since it occurred before this lubrication condition was initiated. Upon closer examination, the thin metal strapping used to overcoat the wiring that was spot-welded to the tooth was found to be the initiation site of the bending failure. Future testing of hardware for this purpose will not have this as a hold-down feature for the tooth root-fillet area.

A series of five loss-of-lubrication tests were conducted in an aerospace-simulated environment using consistent sets of test hardware. Following is a summary of the test results:

On-component thermocouple data revealed that the gears under normal conditions have bulk temperatures that are 20 to 40°F higher than the fling-off temperatures measured by the static shroud thermocouples.

On-component thermocouple data indicated that during loss-of-lubrication, conditions bulk temperatures on the gear are from 150° to 500°F higher at certain times during this test mode, when compared to the static shroud temperatures.