Long before oil, climate change and energy demand were making headlines in Washington, Minnesota State Auditor Rebecca Otto and her husband installed a wind energy system on their property in Minnesota.

“A decade ago, renewable energy was really considered a ‘tree hugger’ issue,” says Otto. “It was quite unusual at the time. We installed our residential wind generator because we’re concerned about the future.”

In 2008, it’s safe to say Otto’s not alone in her concern. Although wind power currently generates a tiny fraction of U.S. electricity (about enough to power one million average homes), the issue is front and center in Washington as the country looks to transform its energy practices, policies and infrastructure.

“If long-term policies are put in place, we could see 5,000 MW of new generating capacity installed annually by 2010,” says Christine Real de Azua, assistant director of communications for the American Wind Energy Association. (AWEA). “If we continue with business as usual, however, with cyclical expiration and extension cycles of federal incentives, such growth is far from certain.” 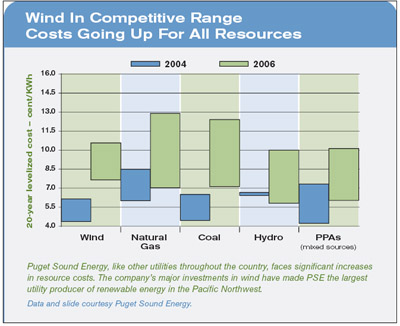 According to the AWEA, U.S. wind power installations were on track to complete a total of 4,000 megawatts of power by the end of 2007, a thirty-three percent increase over previous expectations.

“In sheer number of megawatts, the U.S. has been the largest wind energy market in the world over the past two years,” says Real de Azua.

Currently, the AWEA is concentrating its efforts on a long-term-extension of the federal production tax credit (PTC), a federal renewable energy standard (RES) and investments in “renewable energy superhighways.”

The organization faces major challenges in its attempt to promote the energy benefits of wind power. These challenges include:

• Establishing a stable and supportive policy to promote growth and attract large-scale investments.

• Addressing siting and permitting issues so they are reasonable and cost-effective for developers, satis factory for communities and protec

• Competing on cost to continue to gain market share and deliver benefits to the consumer and the nation.

The House of Representatives had recently approved an energy bill requiring electric utilities to get 15 percent of their energy from renewable sources by 2020. Unfortunately, it was removed from the final bill due to opposition from the White House.

Real de Azua believes the federal government needs to learn from the renewable energy policies currently in place at the state level.

“More than 20 states have successfully implemented a renewable energy standard,” says Real de Azua. “Perhaps most spectacularly in Texas, where the RES jump-started wind power development and the initial target was quickly exceeded.”

The oil-driven state of Texas, ironically, leads the country in wind installments with California, Iowa, Washington and Minnesota rounding out the top five.

In Minnesota, Otto says technology is one of the biggest factors in the development of wind energy. “Manufacturers are constantly coming out with new products, and tweaking the ones they have, which has helped overcome the old objections and reliability issues.”

Otto cites state laws and wind resource capacity as contributing factors in Minnesota’s renewable energy success. “Not only are cooperatives being formed by local farmers, but our legislature just passed one of the most aggressive renewable energy standards in the country.”

Skeptics question whether a federal renewable energy standard is needed since many states lack the necessary wind capacity. Mark Z. Jacobson, professor of civil and environmental engineering at Stanford University, says a federal standard could work.

“All states have some wind resources. Combining wind, solar, geothermal, tidal, wave and hydroelectric energy is ideal for smoothing out the electric supply.”

Real de Azua says installing “renewable energy superhighways” can also distribute the necessary wind supply via transmission lines from wind-rich areas to the market. “Several states and regions are doing this, and the federal government can apply those models at the national level.”

According to Jacobson, wind will play a large role in domestic energy in the future because of its low cost and abundance. “The world has over seven times more wind over land in fast wind locations than potential hydroelectric power available.”

If environmentalists and trade associations can’t get through to politicians, perhaps the next generation can.

“There has been a tremendous surge in interest in students and the general population in renewable energy,” says Jacobson. “Five of the top seven courses in our department (civil and environmental engineering) last year were energy-related. Applications to our atmosphere/energy program also doubled in the last two years. My children are learning about both atmosphere and energy in elementary and middle school. Times have changed rapidly.”

Progressive policies, public support and education seem to be working in Europe, where cost reductions and community wind projects have helped Germany, Spain and Denmark thrive in the wind market.

According to the European Wind Energy Association (EWEA), offshore wind projects are a priority as the industry attempts to provide large-scale renewable power to Europe. Meanwhile, a strategic energy technology plan proposed by the European Commission is currently being addressed to help allocate funds for research investments in renewable energy technologies.

Here in the United States, wind energy advocates continue to wait on Washington.

“With the right policies, the U.S. could secure its newly found but fragile leadership in wind power, and become a hub of wind power development and manufacturing,” says Real de Azua. “The right energy legislation can make a big difference for both young and established industries in the U.S.”

Despite all the question marks, Otto remains optimistic that public demand for renewable energy will continue to grow.

“Everyone is motivated to make this a more prominent source of power,” says Otto. “Wind is only one piece of our diverse energy pie. We’ll continue to come with new technologies that will supplement older technologies, but we’ll always have to be diversified to meet our needs.